Newport Coast was originally developed by the Irvine Company, as a master planned community. Presently, Newport Coast is a large variety of residences to choose from including penthouse condos, beach style cottages, family centered neighborhoods and custom built ocean view estates. Residences in the this area have views of the Pacific Ocean, Catalina Island, Newport Coast, Newport Harbor, whitewater, surrounding mountains and picture perfect sunsets. There are 27 distinctive neighborhoods in Newport Coast. There are both gated and non-gated neighborhoods to choose from. Home values in this area range from 500,000 dollars to 25 plus million dollars. The Franco Team of real estate professionals is Newport Coast experts, who help you find the home of your dreams.

Commandingly perched atop one of Southern California’s most desirable parcels of land, this custom designed crown jewel securely nestled at the pinnacle of Crystal Cove o...

Located within the custom gates of Newport Coast’s premiere private community, Crystal Cove this estate offers timeless elegance and seclusion nestled on one of the large...

Unquestionably one of the best single lots in all the California Riviera, 1 Pelican Crest Dr is The pinnacle of coastal living and is situated on a nearly 3/4 of an acre ...

Amazing custom build to suit opportunity in one of the most exclusive enclaves in Crystal Cove. Perched atop the ultra prestigious Crystal Cove Community in Newport Beac...

An enchanting palatial estate behind the guarded gates of Pelican Crest. Reminiscent of an Italian villa, the five-bedroom residence is set on an appx. 300' deep parcel o...

Perched above the highly coveted community of Crystal Cove, the exclusive custom home lots of Crystal Cove is the epitome of luxury and exclusivity. Behind a second set ...

One of the finest residences in Newport Coast in the Pelican Hill state. A rare tennis court and pool estate built by Fari. stunning golf course and ocean views. Graciou...

This home is a great opportunity to purchase a home perched on the one of highest hilltops of Pelican Hills which offers residents a 270 degree panoramic view of the ocea...

The luxury of space, the rarity of a special coastal locale and behind the exclusive guarded gates of Pelican Point, 7 Shoreview is one of a handful of properties in the ...

Uncompromising attention to detail is found throughout 4, 767 square feet +/- with five bedrooms and six baths, including two guest Casitas. The home benefits from an ext...

This attractive residence is perfectly situated at the most prominent and highest elevation in Pelican Ridge Estates with a generous 17,250 square foot cul-de-sac lot loc...

A sense of privacy and sanctuary permeate this Pelican Heights property, with a full renovation bringing revamped style, and a hilltop setting offering incredible bird's-...

Exuding timeless elegance and refined, yet casual luxury, this immaculate estate is nestled on a large, private lot in one of Orange County's most prestigious enclaves. W...

One of the only publicly offered custom homesites within Newport Coast’s coveted Pelican Crest private gated community. This 20,000+ sqft lot represents one of the last o...

Set on an exclusive promontory, with arguably the best views in the community, this recently renovated home offers spectacular sight lines that span the coast and linger ...

Located behind the secured gates of Pacific Ridge, this Costa Azul beauty encompasses all desirable features in a luxury residence near the coastlines of Newport.   ...

Affording priceless ocean views from its prime corner location, this rarely offered residence is second to none. Set behind the prestigious guarded gates of Crystal Cove,...

Stunning Home on a Corner lot with some views in the exclusive 24-hour guard-gated community of Newport Ridge North -Provence. This expanded plan 3 offers approximately ...

Extensively remodeled and bursting with character, this stunning Newport Coast residence is a must-see! Manicured landscaping, paved pathways, and a tree-lined street len...

Nestled behind the gates of St. Laurent sits 25 Dorian. This property features almost 2,800 sqft of interior living space on an almost 4,000 sqft lot. Upon entering the h...

This stunning, tastefully remodeled home is ideally situated at the end of the cul-de-sac in the beautiful gated community of Sancerre. Uniquely positioned against the na...

COMPLETELY REMODELED! Beautiful, peaceful, and quiet Townhouse in The Vistas! MOVE IN READY! Whether you are looking for a primary residence in Newport Coast or a second ...

Welcome home to the prestigious gated community of Altezza in the highly sought after community of Newport Coast. Located up high on the hillside above Newport makes for ...

Welcome to this detached Newport Coast home in Verona. Inviting floor plan with three bedrooms plus a bonus room off the master that could be used as an office/theatre or...

Welcome home to 24 Dauphine, a beautifully finished home behind the gates in the desirable Summit community in Newport Coast. Perched on a corner lot, this property boast...

Based on information from California Regional Multiple Listing Service, Inc. as of . This information is for your personal, non-commercial use and may not be used for any purpose other than to identify prospective properties you may be interested in purchasing. Display of MLS data is usually deemed reliable but is NOT guaranteed accurate by the MLS. Buyers are responsible for verifying the accuracy of all information and should investigate the data themselves or retain appropriate professionals. Information from sources other than the Listing Agent may have been included in the MLS data. Unless otherwise specified in writing, Broker/Agent has not and will not verify any information obtained from other sources. The Broker/Agent providing the information contained herein may or may not have been the Listing and/or Selling Agent.

All Shady Canyon Homes for Sale 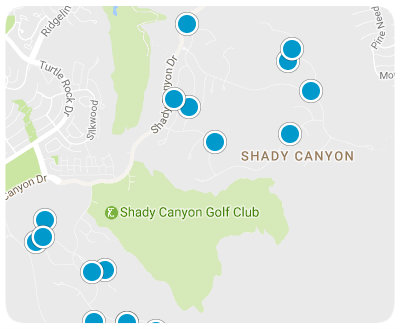 Shady Canyon is one of the finest communities in Irvine, near Newport Beach. With golf course, surrounding mountain and hill views, Shady Canyon is a desirable place to begin your Irvine real estate market search. Shady Canyon is surrounded by world class golf course, has resort style amenities and is part of the award winning Irvine Unified School District. Take an afternoon and explore all Shady Canyon has to offer.

Michael Franco is a luxury real estate agent that will give you a personalized tour of the most unbelievably gorgeous luxury homes in Shady Canyon, Irvine, California.